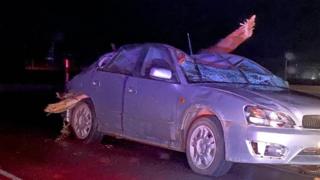 The storm caused immense damage across the state

Western Australia has been battered by a massive storm which ripped roofs off houses and downed trees across a 1,000km (620 miles) stretch of land.

More than 60,000 homes were without power on Monday – most in the main city, Perth. No injuries were reported, officials said.

The state’s south was particularly hard hit with dust storms, torrential rain and huge waves along the coast.

Authorities had warned residents to prepare a “once-in-a-decade” storm.

The Bureau of Meteorology said it stemmed from two colliding systems: the remnants of an out-of-season tropical cyclone, Mangga, and a cold front pushing from the south.

That front continued to drive heavy rain across on Monday, prompting warnings of possible further flooding and damage.

Strong winds kicked up dust storms ahead of the rain

A Department of Fire and Emergency Services (DFES) spokeswoman told the BBC the storm had lashed homes “right across the southern half of the state”.

Damage was recorded across a mammoth area – from the resort town of Kalbarri to the town of Denmark, on Australia’s south-west tip.

A severe weather warning remains in place across the region. Some parts could see more than 70mm of rain, forecasters said.

“This is a rare event for WA particularly due to the extent of the area affected and the possibility of multiple areas of dangerous weather,” said the Bureau of Meteorology.

Britain Plans Incentives to Bring Workers Back Before Furloughs End

How to do Keyword Research for SEO